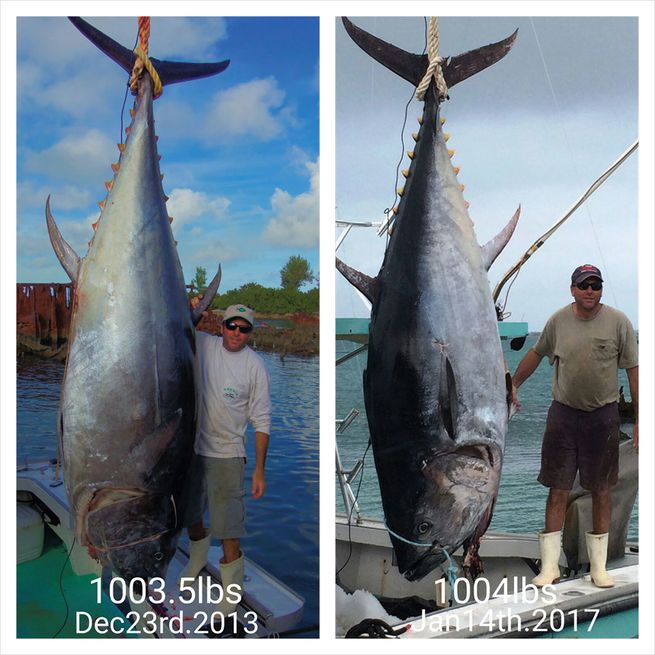 Compare most anglers' goals and catching a giant bluefin tuna is probably at or near the top of the list. Revered for their incredible power, these finned behemoths are strangely scarce in the waters surrounding Bermuda. But landing one on rod and reel was a lifetime dream of native fisherman David Soares. Catching two over the 1,000-pound mark is as rare as winning the lottery. Yet on January 14, 2017, Soares did just that when he doubled his total by boating a second grander.

Fishing solo, the third-generation commercial tuna and wahoo angler had just put out five lines near the Challenger Bank when both downriggers rods went off. Half a spool of line disappeared from each reel before Soares began his brief battle.

"It was a weird fight," he says. "The fish never pulled any more line and I easily cranked it back to the boat in a few minutes since it had eaten both baits. I got it alongside, stuck it with a harpoon and then used a block and tackle to bring it aboard." Back in port, the bluefin tipped the scales at 1,004 pounds and Bermuda officials later confirmed it was the largest bluefin ever landed on the island. Soares was using 130-pound-class tackle with Diamond line and naked ballyhoo for bait.

"I won't disclose the leader size," he added with a laugh. "I can't give away all my secrets."

Despite its reputation as a fish haven, bluefin tuna are a rare catch in Bermuda. Andrew Card previously boated one weighing 940 pounds and Soares landed another grander four years ago. His first giant weighed 1,003.5 pounds.

"As far as I've been able to determine, only 12 bluefins have ever been caught in Bermuda and I landed two of them single-handedly," he explains. "There was no one else aboard either time." Soares's boat is a 45-foot Central Marine built in Prince Edward Island, Canada. The Kerry D is named after his wife.

"We have lots of yellowfin tuna, blackfin and wahoo, but bluefins are a random, one-off bite," he adds. "There's no shortage of bait and other big game fish, yet bluefins are very unusual for our waters. I don't know why. Maybe we're too far east for their normal range." In addition to the pair of granders, Soares has also caught five other bluefin tuna while fishing the small longline boat he owns and operates.

"The key to landing the giants is using heavy tackle, no less than 130-pound class," he says. "That's about the only thing that will stop 'em. On that 1,003, it dumped nearly all the line off a 130 reel. I only had a few wraps left on the spool when I finally managed to turn it. The one this year was a lot easier."

Soares is no stranger to the tournament big stage either. He is a regular participant in the Bermuda Triple Crown Series, competing either aboard the Kerry D or as a crew member on private boats. In 2014 he helped guide a junior angler to a 693-pound blue marlin during the Big Game Classic tournament. It was only the second fish ever caught by the 13-year-old. The first was a brown trout.

"That was quite an accomplishment," Soares says. "I was very proud of that young man.

"I'm proud of my grander tuna too," he adds. "When I did it the first time it was a dream come true. Catching one had always been on my bucket list. But when it happened the second time, it was over the moon. That first one was a lifetime accomplishment. But to do it twice? God was definitely shining down on me."