Team Overproof, a 50’ Topaz based out of Bermuda led by owner and Captain Peter Rans with mate Morgan Outerbridge, came from behind to win the 2022 Bermuda Billfish Blast. Overproof angler Jason Friedman released one blue marlin on the first day of fishing but the team scored a blank on the second day.  The third and final day of competition started well with angler Martin Estis releasing a blue at 9:16am. Team Overproof was tight again at 9:35am with Estis back in the chair.  After an hour battle, Captain Rans called in the boated fish that ultimately weighed 610-pounds to bring their score to 1610-points giving them first place team honors and winning them $38,587.50 and the invitation to the Costa Offshore World Championship. Captain Rans has weighed seven qualifying marlin over the many years he has fished the Bermuda tournaments but this is his first outright win of a BTC series event. Team Overproof leads the Bermuda Triple Crown Billfish Championship with 1610-points heading into the second leg of the series.

Team Lunatico, a 63’ Titan out of Palm Beach, Florida with Captain Corey Gillespie in his seventh season in Bermuda and owner and angler Lance Converse, called in a hook up at 2:44 on the third day of competition and knew it was a nice one.  At 3:44pm tournament control got the call the fish was boated with the measurements putting it close to Overproof’s 610-pound fish that had already been weighed. Anticipation and the crowds built as we waited for Lunatico at Barrs Bay Park.  Once again the Island Construction crane was put to use as the fish was hoisted on the scale coming in at 682-pounds.  Team Lunatico took both Winner Take All Marlin Jackpots worth $87,300.

Team Sea Striker a 61’ Jarrett Bay out of Morehead City, North Carolina with owner Adrian Holler was back for his seventh season in Bermuda with Captain Pete Zook and mate Morris McGahey. The team stayed consistent catching a blue on the first and second days of fishing with their third blue release coming at 9:30am on the final day. As time was running out, Sea Striker recorded a white marlin release at 4:27 just three minutes before lines out giving the team 1600-points earning a Second Place finish in the Bermuda Billfish Blast.  Sea Striker was also in the Optional Overall Billfish Release Points Jackpot earning first place in that category winning a total of $51,052.50.

Team El Cazador, an 85’ Ricky Scarborough, is a family affair with three generations on board led by owner Bobby Ricks of Galveston, Texas.  Captain Paul Alderman with mate Scott Behrhorst put 15-year old angler Jack Ricks on the bite releasing two blues on the second day of fishing to win the Daily Release Jackpot. On the final day of fishing team El Cazador released the first blue of the day giving the team and their Junior Angler 1500-points placing third in the tournament on time and Top Angler honors for Jack Ricks. El Cazador was also in the Overall Release Points Jackpot placing second earning total winnings of $57,300.

Team Builders Choice, a 64’ Jarrett Bay out of New Bern, North Carolina led by owner Harris Huddle and Captain Brent Gaskill made up for two slow days of fishing by besting the field on the third day catching two blues and a white to win the Daily Release Jackpot of $28,800.

Team Just a Dog, a 62’ Viking led by owner and captain Mike Farrens from Tuscaloosa, Alabama were very consistent catching a blue marlin each day of the tournament for angler Chase Farrens to win the Third Place Overall Release Points Jackpot worth $11,160

The 35 team field of 197 anglers caught 73 billfish including 44 blues, 26 whites and 3 spearfish over the three days of fishing. The tournament culminated with the traditional gala awards banquet in the Harbourview Ballroom at the historic Hamilton Princess Hotel.  The tournament awarded $303,000 in purse plus prizes. 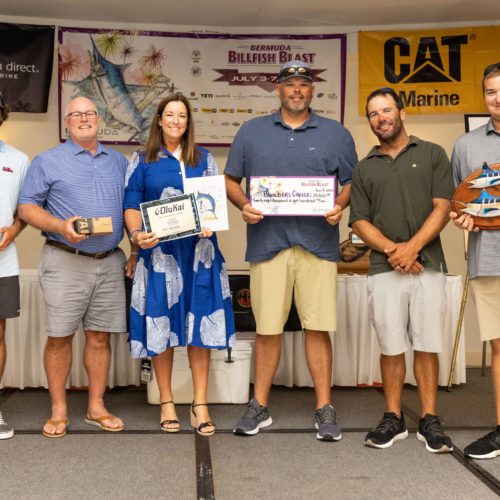